Nick Redfern on Crypto-Rats at Roswell; Areas of Animal Weirdness 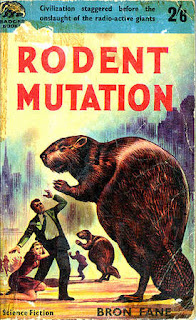 Strange connections; for example, on the heels of the recent radioactive mouse found at the Hanford nuclear site,  Nick Redfern has a fantastically juicy Fortean crypto article about "crypto rats" at Roswell.  This is just a great read; something so bizarre it even "flummoxed" Nick, and I would guess he's not easily flummoxed. As he writes:


... the following, which is beyond any shadow of doubt one of the strangest stories I've ever heard - and, I can say for certain, I've heard some very strange ones!

The story concerns "crypto-rats" at Roswell:


... a pack of large, rat-like animals, that appeared to be very intelligent, moved and acted in group-fashion, and that were highly vicious and very weird. And that was about it: a fragmentary story of truly weird proportions.

This reminds me of a Dean Koontz short story; I don't recall the name of the story, I think it appeared in his collection of short stories, Strange Highways, about highly intelligent rats (or mice, forget which) with great strength and almost supernatural abilities who escape from the lab (military, I want to say, but it's been awhile since I read the story) and invade a nearby farmhouse.

Another comment Redfern made in his post I found interesting:
...interesting stories about large, exotic cats seen around Texas, a tale of a giant-catfish, and several more accounts of out-of-place or over-sized animals in the Lone Star State.

And, as Nick points out in his story of the Roswell crypto-rats, the rats were sent to Carswell, Texas. Other animal weirdness as well; I just posted here about the high number of black deer seen in Texas.

As Nick writes, Texas is home to a lot of animal weirdness!

(hat tip to Boing Boing for the cover art image)
Posted by Regan Lee at 11:12 AM