It's called "de-extinction." Bringing back once extinct animals to the realm of the living. According to this Yahoo news item, scientists are now working on eventually bringing back the wooly mammoth -- sort of. They want to create a hybrid mammoth-elephant that will survive in "... in cold climates, where it should face fewer threats from humans." That sounds disingenuous as well as naive.

Woolly Mammoth DNA Inserted into Elephant Cells - Yahoo News: But woolly mammoths aren't the only candidates for de-extinction. In 2003, scientists briefly revived the Pyrenean ibex, which went extinct in 2000, by cloning a frozen tissue sample of the goat. However, after being born, the clone survived for just 7 minutes. (Yahoo News)

Article also mentions the attempts at bringing back the passenger pigeon and Tasmanian tiger, as well as the obvious ethical considerations. For example, the effect upon the habitat the newly created animal is brought into.

Bird Experts "Horrified" To Discover Meat-Eating Rainbow Lorikeets: It apparently got started in an Australian backyard when a property owner put out minced meat for magpies, currawongs, and kookaburras. He also put out seeds for vegetarian birds like galahs, king parrots, and rainbow lorikeets (who really shouldn't be eating seeds because they damage their delicate tongues). It's also worth pointing out that the property is located next to native trees and shrubs, so food supply is not a problem for the lorikeets.

But seven years ago, the property owner noticed the lorikeets eating the meat, and they've been eating it ever since. In fact, they have even started to chase other birds away in an effort to defend the meat.

10,000 Dead Sea Lions Wash Up In California, Officials Announce Crisis: 10,000 baby sea lions have washed up dead on a California island, with experts calling the unexplained deaths a “crisis” and “[Pups] are washing ashore at a rate so alarming, rescuers said Thursday, this year is the worst yet”.

A couple of weeks ago, approximately 2,000 geese fell from the sky in Idaho:

(CNN)Idaho wildlife officials have retrieved 2,000 dead snow geese that fell from the sky this week.
The birds, whose carcasses were collected over the weekend, appear to have died of avian cholera, the Idaho Department of Fish and Game said Tuesday.
"The migratory birds were on the return leg of their migration from the southwestern United States and Mexico to their breeding grounds on the northern coast of Alaska," said Steve Schmidt, a regional supervisor.

Whatever the reason (the official mainstream story is the least likely no doubt) these mass deaths are a clear signal something is very, very amiss.

Theories abound: military sound experiments, HAARP, chemtrails and so on. The paranoid mind, mine included, suspects intentional and insidious. But again, whatever the reasons for these two recent mass animal deaths, related or not, the signal is loud and obvious. Are we listening?
Posted by Regan Lee at 11:06 AM No comments: 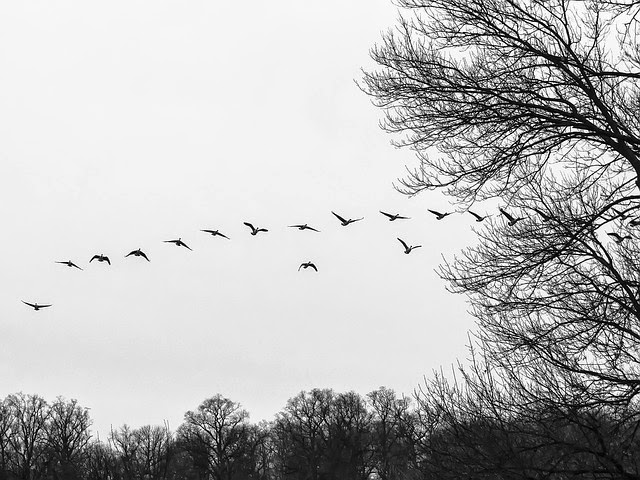 Oh, I wish I had a camera with me today! The field next to the playground -- full of geese. Hundreds of geese. They hang out there all the time. I see them flying over our house and know they're on their way to that field, -- a few fields really -- since it's only about four blocks away. Anyway, there the geese are, calmly standing around Kids playing on the playground alongside the field. Suddenly, the entire flock just rises up into the air, making these odd sounds, sort of like distress calls but not exactly, not really that. Never heard that sound before. I couldn't see anything that set them off -- any other bird, etc. The geese flew right above our heads on the playground --- and the kids! The children just ran and laughed and screamed and ran, while the geese circled low above us. Then the geese did this spiral kind of thing -- like a crop circle in the air. They just kept circling above us, then flew right back to where they were, and settled down like nothing had happened. Those geese have been there all winter, and are used to the children playing out there -- a fence divides the playground from the fields -- maybe the geese were just saying hello.
Posted by Regan Lee at 7:04 PM No comments:

Rabbits: The Strange, the Satire, and the Synchronicity

Last night 's Ghost Adventures was about Tennessee’s Bell Witch. (As with most of their episodes, I wished they had used a psychic medium as part of their investigation.) Among the ghostly events surrounding the Bell Witch phenomenon, is the hybrid entity that appears at times to witnesses. A black creature with the head of a rabbit and body of a dog.

I find that aspect fascinating, as I do most cryptid type sightings. Ghostly or otherwise, if it involves animal or animal like beings, I’m there. For whatever reason, rabbits seem to intrigue me. They’re cute of course, but at the same time, I’ve always felt an aura of something else going on behind that assumed innocence and cuteness. I wouldn’t say I’m afraid of rabbits -- I’m not -- or find them sad and sleazy, like clowns. Just...something. Maybe it’s the history of folklore and trickster mythos surrounding rabbits that lingers. 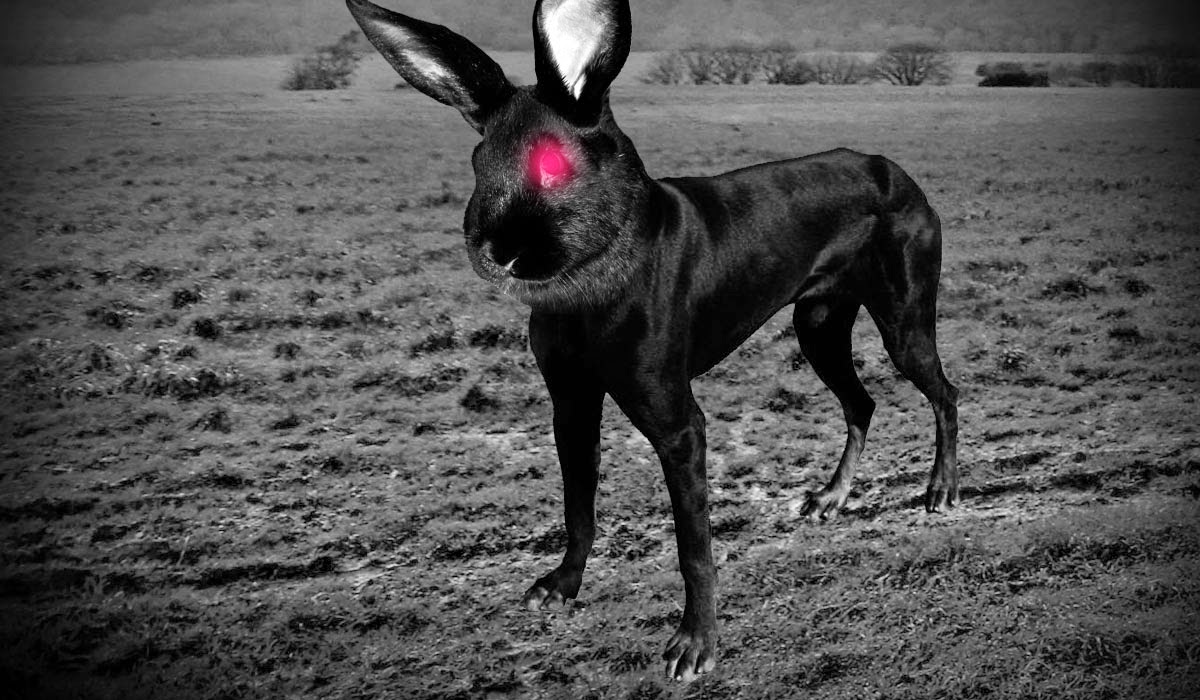 Of course, the Bell Witch rabbit-dog is on the sinister side.

This morning brought with it rabbit synchronicity. First, this item in Eugene’s Register Guard about a man frustrated with a feral rabbit invasion: Voracious Rabbits Plague Culver Man.   (Personally, he sounds like a grumpy old man. $150 damage in flowers, frustrating sure but come on. Complaining about gas money to relocate the rabbits, where he can then legally either shoot them and eat them, or, turn them over to an animal sanctuary. No matter what alternatives are offered by the city he's not satisfied.)

Then on my Facebook page, this New Yorker cartoon: 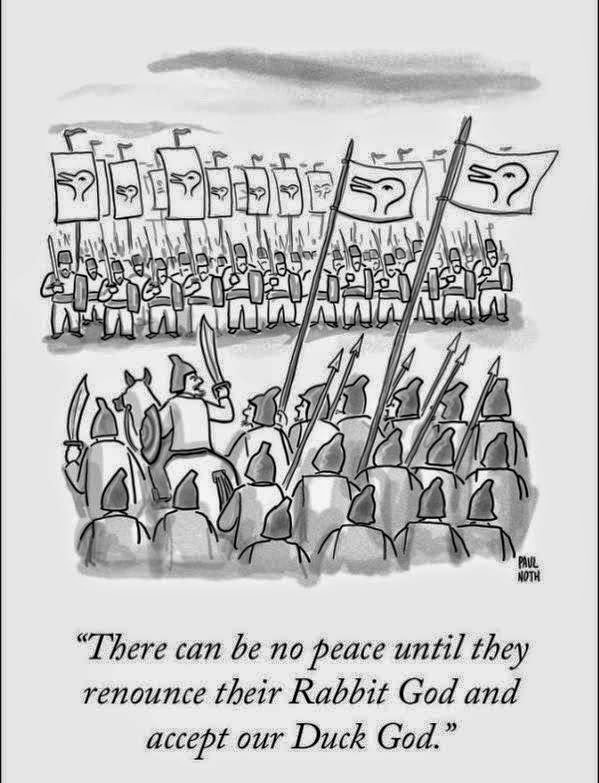 And this, which I don't quite get, but there it is: 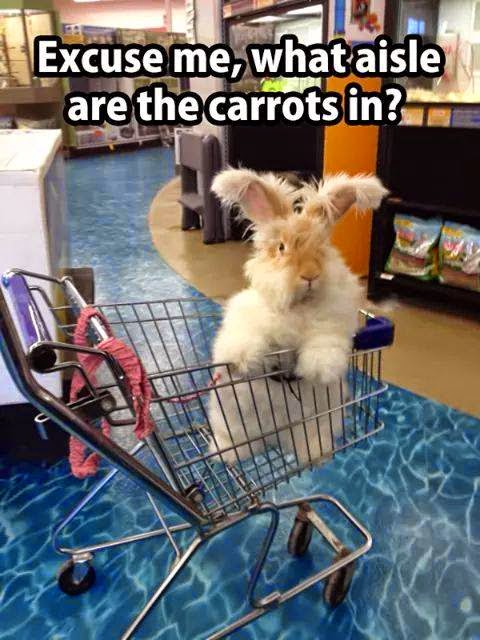