At an Australian resort, wild dolphins bring offerings of food to humans:Wild Dolphins Give Humans Gifts : Discovery News
Posted by Regan Lee at 9:12 PM No comments: 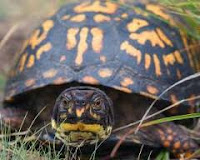 This study is a sad and sick glimpse into human nature. Mentioned is Hal Herzog's book  "Some We Love, Some We Hate, Some We Eat," mentioned in the article. Haven't read it but sounds interesting and it's now on my long list of books to read.

College student's turtle project takes dark twist - Yahoo! News: CLEMSON, S.C. (AP) — Clemson University student Nathan Weaver set out to determine how to help turtles cross the road. He ended up getting a glimpse into the dark souls of some humans.

Weaver put a realistic rubber turtle in the middle of a lane on a busy road near campus. Then he got out of the way and watched over the next hour as seven drivers swerved and deliberately ran over the animal. Several more apparently tried to hit it but missed.

A strange Christmas card, but I like it even though it is quite creepy and strange: 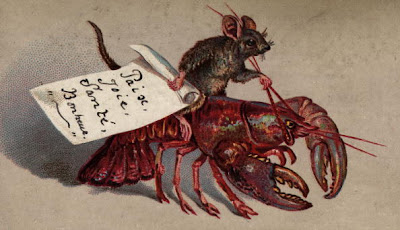 
Remember this name: AquaBounty, the company the FDA "...will likely grant approval" to to market the Frankenfish.

FDA Soon Ready to Approve Genetically Modified Salmon for Human Consumption
Posted by Regan Lee at 11:13 AM No comments:

Mysterious and sad animal mutilations in Kentucky. Seems to be primarily the ears of goats and cattle that are being chewed on, but sadly, causing much damage in some cases -- some animals have had to be put down. Attacks seem to happen at night.

Mystery animal attacking livestock - wave3.com-Louisville News, Weather & Sports: SHELBY COUNTY, KY (WAVE) - A community of farmers in Shelby County have been terrorized over the past few weeks by a mystery animal.

The creature has been attacking, but not eating, livestock such as goats and calves.

Kevin Cox, a farmer in the area, had already had one animal fall victim to an attack and he said his dogs alerted him of a second, "I heard the goat the dogs going off and I ran out there and I looked and saw the goat laying on the ground."

His goat, Polka-dot, is now missing all of one ear and almost lost both of them.

Cox explained, "I noticed my whole steer bull looking a little different. It was covered in blood. Then my other two bulls come up and they had their ears all chewed up."

Like all slow lorises, N. kayan has a toxic bite—one of the few mammals that do, noted Munds, who worked with Susan Ford of Southern Illinois University in Carbondale and Anna Nekaris of Oxford Brookes University in the U.K.

To access its poison, a slow loris rubs its hands under glands near its armpits—"kind of like Molly [Shannon] from Saturday Night Live," Munds quipped. Then the animal applies the poison to its teeth, and the resulting bite can put a person or predator into potentially fatal anaphylactic shock.

"Alleged" cat abuser Betty Gould is being allowed to keep her cats, all 60 of them. Not sure why the term "alleged" is used since there was a witness, or, why she's allowed at this point to keep her cats. Alleged Cat Abuser Keeps Cats | KEZI


We’re doing our part here. We work for the community. We’ll continue to be following this case and doing what we need to do so they can be assured of that. We’ll be working hard on this all the way through,” said Sgt. John Umenhofer, Springfield Police Department.

If the SPD is "working for the community" ... well, you know. Anyway, article says there's a Facebook page set up in protest: Concerned Citizens Against Betty Gould. No link provided. Easy enough to find via Facebook however, and, here's the link.
Posted by Regan Lee at 9:53 PM No comments:

West Virginia’s mascot shoots and kills a black bear with the musket we all thought was a prop | Dr. Saturday - Yahoo! Sports

Jonathan Kimble, the psycho bear killer and mascot for West Virginia's Mountaineers, (see yesterday's post on this story)  is sorry and in trouble. Sort of sorry, and kind of in trouble; doesn't seem to be any big issue for the parties involved, it's simply a matter of responding to no doubt what they see as over reactions from the rest of the country. Including Graham Watson, write of the piece, who writes:

OK. Your first thought after reading this should be: "Holy crap, that thing really works?"

Your second thought should be: "Holy crap, does Dana Holgorsen know?"

And then somewhere, in the recesses of your mind, you should be just a little impressed that Kimble shot a bear out of a tree with a musket. I mean, look at that thing.

And then you should be outraged -- if you value animal rights or don't like hunting or -- because it was a small (possible baby) bear he shot out of the tree.

Setting the catfish amongst the pigeons: The curious case of the fish that hunt birds | Mail Online

Catfish. Hunting pigeons. In France. True Forteana.Setting the catfish amongst the pigeons: The curious case of the fish that hunt birds | Mail Online
Posted by Regan Lee at 1:03 PM No comments:

"On the Lighter Side" : Bear Killing

Yes, appearing in the "Lighter Side" section of the paper is this item about Jonathan Kimble, a mascot with a musket. So, in keeping with peace and goodwill to others and all that, he kills himself a bear. That was in a tree. Sporting, that. Then he uploads the killing to YouTube.

Sick bastard of course, but editors thinking this is material for all those "lighter side" moments have a twisted sense of things as well.

ON THE LIGHTER SIDE: Now WVU has ordered Kimble to stop using his university-issued weapon on hunting trips after a video of this week’s kill was posted online. He says hunting with the gun is a Mountaineer mascot tradition.

The 24-year-old Franklin resident accompanied more than a dozen friends and family on the trip in Pendleton County on Monday. In the video, Kimble is shown firing the musket at the bear in a tree.

'I was outraged': Animal mailed to postal office in cardboard carrier.

Sad but true, some psycho mailed a live dog to someone. Equally unbelievable is the fact no one did anything about it, at least according to the news item. Isn't there some way the sender as well as the recipient can be traced so they can be cited -- if not outright arrested and fined?
Posted by Regan Lee at 12:48 PM No comments:

Will Oregon Zoo's prized baby elephant end up in a traveling show?

Tragic, and a disgusting example of humanity's gratuitous need to use abuse animals as "entertainment." Bad enough elephants are in zoos, but the potential fate of the Portland Zoos recently born elephant is dismal: Will Oregon Zoo's prized baby elephant end up in a traveling show? "Trunks Will Travel" cute, huh? Owners may or may not take ownership.

Please do what you can to make sure this doesn't happen. Animals, especially creatures such as elephants, do not belong in circuses or to be rented for entertainment. The bond between mother and child in the elephant world is life long and strong. The good news is the zoo insists the elephant will "stay put." But there is a contract dispute:


Kari Johnson, who co-owns Have Trunk Will Travel with her husband, Gary, told the Times that they were looking forward to visiting the newborn elephant and added that details regarding her future had not yet been worked out.


Perris, California, where the Johnsons have their elephant for hire business.  That sounded familiar. So I went back into my files. Ah, here it is; I posted about lion meat hamburgers available at a Tuscon, Arizona restaurant. Source of the lion meat? Perris, California. Tuscon Restaurant Serves Lion Meat Tacos. I have no idea if there is a connection between the lion meat and the Johnsons; I'm not saying there is one, only that the town of Perris, California seems to be the area for gratuitous indulgences with animals. There's more. Seems Have Trunk Will Travel was sued for animal abuse and fraud, according to this article in Animal Defenders International:


Los Angeles, Monday June 27, 2011 -- Today, in the US District Court, Central District of California, Los Angeles, Animal Defenders International (ADI), together with members of the public, Gail Profant and Leslie Hemstreet, filed suit against Have Trunk Will Travel, as well as the owners Gary and Kari Johnson, over their claims about the training of the elephant Tai, who played Rosie in the film ‘Water for Elephants’. The suit is based on erroneous assurances that the defendants gave the public that the elephant Tai was trained with kindness for her role in Water for Elephants. Video footage released by Animal Defenders International (ADI) showed Tai and other elephants being electric shocked with a stun gun and jabbed and hit will bull hooks during her training for the same types of tricks seen in the movie, at the Perris, CA ranch of Have Trunk Will Travel.

North Korea Finds Secret Unicorn Lair Said To Prove Pyongyang Was Capital Of Ancient Korea: In an announcement Friday that seems better suited for a fairy tale, a North Korean state news agency reported that archaeologists recently reconfirmed the lair of a unicorn once ridden by an ancient Korean king.