This item from the Deceptology blog: 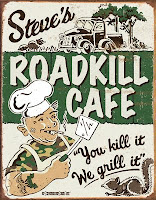 As Lisa writes at her blog; "Is the thought of connecting psychically with dolphins too woo-woo for you? Then stop reading right now!

I would have laughed at the idea myself not long ago if it weren't for a dream I had of dancing with dolphins."


One of the decks used in her spread is Doreen Virtue's Magical Mermaids and Dolphins deck, which I have and absolutely love.
Posted by Regan Lee at 10:56 AM No comments:

Hunters Shoot Drone Out Of Sky: “Octocopter” Was Owned By Animal Rights Group | _

Hunters Shoot Drone Out Of Sky: “Octocopter” Was Owned By Animal Rights Group:


Police are investigating an incident at a Berks County hunting club in which someone on the hunting grounds allegedly targeted a mechanical flying object rather than a living and breathing one.

SHowing Animals Respect and Kindness (SHARK) are in the midst of a campaign against the Wing Pointe commercial hunting grounds in Hamburg, Berks County and its live pigeon shoots in which the birds are shot down. SHARK began to use an “Octocopter,” a remote controlled flying machine with a high tech video camera, to secretly record the pigeon shoots as they happen.

On one section of a Texas highway, you can drive 85 miles an hour. I like that idea. I'm not sure I'd actually want that reality, but the idea of going 85 -- legally -- is a pleasant one, even if a daydream. But there are risks (duh), including feral hogs, which cause huge problems for citizens of Texas, not to mention the hogs as well:

Driving America’s 85-mph toll road before the fun gets old | Motoramic - Yahoo! Autos: There've already been quite a few accidents, four on opening night, in fact, including one car completely totaled. That's because Texas built the 130 in prime feral hog territory. This forced them to put up large digital signs, at 10-mile intervals, reading "WILDLIFE CROSSING." That's all fine and good, but the problem is that wildlife can't read. Just outside Lockhart, I had to swerve fast and violently to avoid a freshly eviscerated coyote carcass. This is going to be a disgusting massacre without end.

How deeply ironic, then, that I pulled off TX 130 on my way home to take a five-minute jog into Lockhart, the barbecue capital of America, and bought a two-pound slab of pork ribs at Smitty's to bring home. What was once a half-day family trip has suddenly become an errand far less time-consuming than a visit to IKEA.

As usual, there's the skeptic side of this issue where humans are elevated in all ways; non-humans are incapable of emotions or "morals." That belief allows some to mistreat animals, whether it's outright abuse, or exploitation for "entertainment."


Animals Are Moral Creatures, Scientist Argues - Yahoo! News: In the case of the child-rescuing gorilla Binti Jua, for instance, "what sort of instinct is involved there? Do gorillas have an instinct to help unconscious boys in enclosures?" he said.

And even if instinct is involved, human parents have an instinctive desire to help their children, but that makes the desire no less moral, he said.

Being able to reason about morality isn't required to have a moral compass, he added. A 3-year-old child, for instance, may not consciously articulate a system of right and wrong, but will (hopefully) still feel guilty for stealing his playmate's toy. (Scientists continue to debate whether or not babies have moral compasses.)

If one accepts that animals have moral compasses, Rowlands argues, we have the responsibility to treat them with respect, Rowlands said.

"If the animal is capable of acting morally, I don't think it's problematic to be friends with your pets," he said. "If you have a cat or a dog and you make it do tricks, I am not sure that's respect. If you insist on dressing them up, I'm not sure I'm onboard with that either."

(Thanks to Anomalist for link) This is the kind of animal story that warms the Fortean's heart: Giant Caterpillar Outside Manchester, 1850!  Beachcombing's Bizarre History Blog
Posted by Regan Lee at 9:45 AM No comments:

I saw this story a few days ago but didn't want to deal with it. Sometimes the greed and arrogance, as well as cruelty of humans just does me in. In this case, Dylan Mayer of Washington state and an over-blown sense of personal entitlement, tortured an octopus.

Mayer got himself a one day license to "hunt" an octopus. He did this in a protected marine area. He tricked the octopus by making noise in order to lure it from its home, then, according to witnesses, punched the still living octopus repeatedly after he hauled it onto his truck. Mayer said he wanted the octopus not just for its meat, but "to draw it for this art project."

Even if the octopus was hunted for food, as in hunting because one needs to survive, the gratuitous nature of the act is unjustified. If you need to hunt, then kill quickly and cleanly, and with gratitude.

A very sad story. So click on the link below and sign the petition. And call out this ass clown Mayer.
Stop Issuing One-Day Hunting Licenses! - The Petition Site
Posted by Regan Lee at 1:09 PM No comments:

I hate to see things like this. Promoted as a cute and fluffy human interest story, Yahoo shows slides of people and their "unusual" pets.

First up is a three year old hugging his pet python. There's a "pet" bear, and baby lions, among other kinds of animals.

These animals are the "pets" of owners all over the world, not just the U.S.

Another sad incident of an all too damn proud of himself hunter grinning gratuitously over his kill. Coyote or Wolf? Missouri Hunter Shoots 80-Pound Mystery Animal | Field & Stream
Posted by Regan Lee at 7:23 PM No comments:

Lesley writes about mystery animals in New Mexico for her OctoberGrey Matters column at Binnall of America.
Referring to David Paulides book Missing 411, which had just arrived, Lesley writes:


Had I got the book during a different time of year, I might not have even noticed, but it is September as I write this and, during the first part of September, we had two unusual experiences when we took the dog for her nightly walk. There have also been reports of odd encounters in the mountains nearby. Now, whether any of these things have anything to do with the Missing 411 of the book, I couldn't say.

Our first experience at the very beginning of Sept when we were taking Pooka (the dog) for her walk and decided to take the short way back home. The short way is a road that runs right in front of our next door neighbor and our house. On the other side is nothing but open land running through the middle and then a road and houses on the other side, which is the road we started on that loops back around. On the far side of my next door neighbors' house, there is also some open land. As we passed by that, we could hear something clawing at the ground and grunting and growling. I have a really bright flashlight which I shined all over the area, but saw nothing. The only thing I could think of was that it might be was a bear. Coyotes are always around and I have never known them to act that way and it didn't seem like something a feline would do, nor did it sound like a cat. We walked home very quickly. I walked backwards, shining my flashlight behind us most to the way to make sure nothing was following or coming after us.

Amazing, beautiful but not surprising. I've always believed that elephants were the dolphins of land; highly intelligent and emotional beings. Stories like this remind us of how little we really know, and understand, about animals, and our relationship with each other. Say hello to the talking elephant... but if you want a chat, you'll have to learn Korean | Mail Online
Posted by Regan Lee at 1:41 PM No comments: