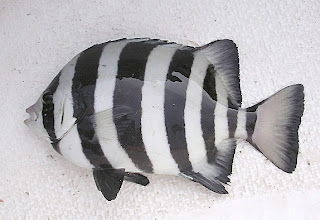 Why not keep all the fish in the aquarium, instead of killing them save for one?

Tiny fish that survived tsunami, ocean crossing from Japan makes debut in Seaside | OregonLive.com: About five striped beakfish were found on a boat from Japan that washed ashore near Long Beach, Wash., last month. The Washington Department of Fish & Wildlife euthanized most of them, perhaps because of fears that the fish would become an invasive species.

But not before someone spirited away one of the black-and-white striped fish to the Long Beach City Hall.

So Chandler and the aquarium staff rescued the critter they have dubbed the "tsunami fish."

Just can't get past my deep deep deep disgust and fear about eating bugs for dinner. I get all the cultural global bigger picture ideals. But as long as I don't have to, I'm not going to.

BBC News - UN urges people to eat insects to fight world hunger: "Insects are regularly eaten by many of the world's population, but the thought may seem shocking to many Westerners.

The report suggests that the food industry could help in "raising the status of insects" by including them in new recipes and adding them to restaurant menus.

It goes on to note that in some places, certain insects are considered delicacies."

At Cryptomundo, this item about the DNA of the Coelacanth:

Cryptomundo  Coelacanth DNA Does Some Weird Stuff!: "The genome of a primitive fish that was once thought to have died when the dinosaurs did has now been sequenced by scientists — and when put into mice, some of the fish DNA caused mice to sprout limbs."

Lion meat tacos, at $34.00 per taco. Just to satisfy the curious-gluttony gene. The owner's disingenuous rationalization is bull. It's like jokes: if you have to explain why this is wrong, there's no hope.Fla. Mexican Restaurant, Employees Face Threats Over Lion Meat Tacos - Yahoo!
Posted by Regan Lee at 12:20 PM No comments:

France has a law that requires farmers to burn the dead bodies of animals, which has left the vulture population without its natural food resource:

Woman eaten by vultures - UPI.com: he body of a tourist was devoured by vultures in a matter of minutes after she fell over a cliff in the Pyrenees in France.

The 52-year-old woman tumbled down a 300-meter drop while taking a shortcut while hiking with friends on Pic de la Pista, in southern France, gendarmerie Major Didier Pericou told The Times of London.

"There were only bones, clothes and shoes left," after the vultures got to her, Pericou said. "They took 45 to 50 minutes to eat the body."