Is it a wolf, an owl or the second coming of the Mothman, no one knows for sure.

"I don't know. I don't have any idea so I don't wether to be worried or not," said Joyce Harrison.

"It doesn't sound like anything I've ever heard," said her husband James Harrison.

A loud screeching noise has been periodically heard in the mountains near Goldtown in Kanawha County.

"I called the sheriff's department and the secretary told me she thought it was a ghost...but no one knows....its one of those deals where one opinion gives into another one," said James.

Cow gives birth not only to triplets, which is rare, but to calves of two different breeds. Story, with pic here.
Posted by Regan Lee at 5:11 PM No comments:

I cannot wait for this to air on SyFy. Produced by Roger Corman, looks campy, looks great. No air date, trailer just says "Coming Soon." WHEN, Syfy Channel, when?

Cryptomundo has an item on a "killer" kangaroo story from 1934. A strange story; that of a kangaroo that was definitely atypical, but also the fact that the story comes, not from Australia, but Tennessee.


During mid-January of 1934, a huge mean kangaroo spread terror among the Tennessee hill farmers. This extremely atypical kangaroo was reported to have killed and partially devoured several German police dogs, geese, and ducks.

The Reverend W. J. Hancock saw the animal and described it as fast as lightning, and looking like a giant kangaroo as it ran and leapt across a field. Another witness, Frank Cobb quickly came upon more evidence of the kangaroo’s activities. The head and shoulders of a large German shepherd or Alsatian were all that remained. A search party tracked the kangaroo to a mountainside cave, where the prints disappeared.

Lon at Phantoms and Monsters: Paranormal, UFOs, Cryptids and Unexplained Phenomena
invites readers to e-mail with ideas about Sasquatch being more than flesh and blood. Is Bigfoot a paranormal, or an inter-dimensional creature?
Lon writes:
I've maintained for the past year or so that Sasquatch may be something other than just a flesh and blood terrestrial being. There have been countless sightings (including myself) of this creature as compared to the amount of physical evidence retrieved. This fact has forced me question the true nature of the beast, namely...is Sasquatch an interdimensional entity? Is it possible that Sasquatch has the ability to move in and out of this plane of existence into an alternative universe? Perhaps you may think this creature is simply not an earth bound entity because it is actually extraterrestrial or of alien origin.
Send him your theories and experiences. I'm looking forward to what Lon has to say about this.
Posted by Regan Lee at 12:38 PM No comments:

This clip has been making the rounds, I've seen it on Facebook, Twitter, several blogs. But it's such a great story of animal communicating I had to post it here. Dobermans are great dogs, incredibly sweet and extremely intelligent. I think a lot of people continue to underestimate animals. While I find this story a wonderful example of our connection with animals and their abilities to think, communicate and yes, express themselves creatively, I'm not surprised. (thanks to Lesley of The Wild Kingdom for the link.)

Deer are attacking residents in Ashland, Oregon. Deer have been attacking humans and dogs; one crashed through a store window.

"Oh deer."
The message written on a boarded-up window at the high-end downtown clothing store Nimbus early this week is a sentiment many people share in the city, where dozens of deer roam.
During this summer's fawning season, which ends late this month, does have continued to cause problems in Ashland. One crashed through Nimbus' window Saturday and several have attacked people walking their dogs in recent weeks.

"Part of the concern is that deer in towns like Ashland have lost their fear of humans, and if they're not afraid of humans anymore, they're going to come closer and there's going to be more of these encounters. In reality, we need to be hazing the deer, by chasing them or spraying them with garden hoses."
Vargas and Don Robertson, the city's parks director, said their agencies have no plans to reduce the deer population.

A World Record: Largest Shark Caught With Rod and Reel

Sad, because you can't really eat the shark, it contains trimethylene oxide, a posion that affects humans the same as being "severely" intoxicated, according to the Phantoms and Monsters blog where you can find more on this story. Though, as the OP says, the toxin can be removed and the shark meat then eaten, which is considered a delicacy in Greenland and Iceland. 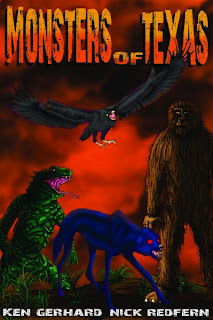 Authors Ken Gerhard and Nick Redfern have a new book: Monsters of Texas. Promises to be a good one! Read more about the new release from CFZ Publications here.
Posted by Regan Lee at 11:11 AM No comments: