binnallofamerica.com: Recent Fortean tinged artistic events have been in the anomalous news lately: fairy doors, mermaid tales, and eerie radio sounds among them.

Probably by now you've read more than one article about the fairy door in San Fransico's Golden Gate park. This idea of creating fairy doors as wee public art installations isn't new; here's a link to an article on the fairy doors (courtesy of The Anomalist) from 2009. A recent article on the current Golden Gate Park fairy door -- the Parks department put an end to the citizens and their whimsy. But not quite, thankfully.
Posted by Regan Lee at 6:36 PM No comments:

New sightings of Chupacabras, from Inexplicata:

Inexplicata-The Journal of Hispanic Ufology: Puerto Rico: A New Spree of Chupacabras Attacks in Guayama: They stopped the pickup truck and looking over a small mound of earth, the saw a dark figure resembling a short-statured man who appeared to be crouching. Chaka reached for his flashlight, got out of the vehicle and pointed it at the figure. He was only able to make out the glow of a single eye; we are uncertain if this was due to tis position. It had a yellowish or bright orange color that gradually diminished in brightness. He also noticed the figure had something strange on its head and back, resembling quills. 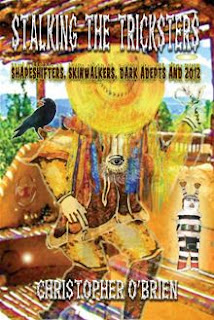 Excellent; one day, hopefully, we'll see a national ban on all exotic animals as "pets." But, um, who keeps a rhino in Virginia -- or anywhere else in the U.S. -- as a pet?


Virginia Proposes Expanding List Of Animals Banned As Pets: HENRICO, Va. -- Time could be running out for you to get that special gorilla or rhino for your home.

A state panel on Wednesday proposed expanding the list of animals Virginia doesn't allow as pets.

The list, maintained by the state Department of Game and Inland Fisheries, already includes animals such as big cats and bears.

The panel, which is studying whether to tighten rules on keeping dangerous animals, proposed adding to the list creatures such as chimps, rhinos, orangutans, hippos, baboons, powerful Cape buffaloes and giant lizards called Komodo dragons.

Man tries to take photo of beaver; it kills him | The News Journal | delawareonline.com

Man tries to take photo of beaver; it kills him | The News Journal | delawareonline.com
Posted by Regan Lee at 7:35 PM No comments:

6 states that might criminalize taping animal cruelty - Salon.com: Tennessee is one of six states currently debating legislation that would ban this form of whistle blowing. So-called “ag-gag” bills vary in provisions, but all aim to make it more difficult, or in some cases, criminal, to shoot undercover factory farm footage. Last year, the statehouses of Missouri, Utah and Iowa passed ag-gag bills, bringing the total number of states with such laws to five. As Think Progress’ Katie Valentine notes, many of these laws received backing from the American Legislative Exchange Council.

Every seventeen years, in the east. And now it's time:


They’re (almost) here! The cicadas are coming | The Sideshow - Yahoo! News: "Most people say it is like a science-fiction movie UFO sound,” cicada researcher Dan Mozgai wrote to Yahoo News in an email.

The East Coast, he added, should expect piles of the dead insects around their homes: "They can pile up like dead leaves."

This is both funny, kind of, and sad. Sad for the animals involved:

Professional Mermaid Linden Wolbert | I am a mermaid

Professional Mermaid Linden Wolbert | I am a mermaid:" A delicate, ladylike blog for mermaids and the humans who love them"

This is very cool!