Here's another example of deer and human colliding: A Rogue Valley (Oregon) Christmas tree farmer says deer are causing damage to his crop. Other xmas tree farmers are having the same problem.


Larry Ryerson with the U-Cut Christmas Tree Farm in Medford estimates that deer have gotten to about 1,000 of their 10,000 trees. They say bucks can even ruin some trees beyond repair.

It seems there's been a "deer meme" what with reports of aggressive deer -- termed so because they're attacking humans on our own turf -- crashing through windows, chasing after dogs, etc. Despite commenting that xmas tree farmers still expect a good crop this year, even with the deer damage, the idea of deer causing trouble for humans seemed noteworthy enough to write an article about it, no matter how short. 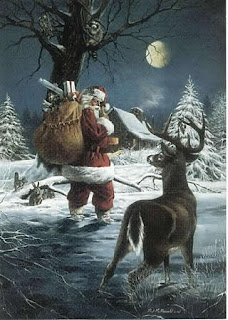 My point here isn't that I'm not sympathetic to those losing their livelihood. I'mjust struck by the Fortean irony and juxtapositions of Christmas trees and deer as iconic symbols on the one hand, and a would be battle between human and deer on the other, as one tries to earn a living by ensuring the availability of one product (xmas tree) while fighting against another (deer) who has been invited, even though unintentionally, by the plethora of trees in its habitat.