Brown Pelicans on the Oregon Coast

This is a sort of update to my previous post on the pelican sighting in Yachats. According to this site, brown pelicans migrate from California to the NW then leave the NW before the storms hit. But very recently, some pelicans have decided to stay in the PNW and not migrate: 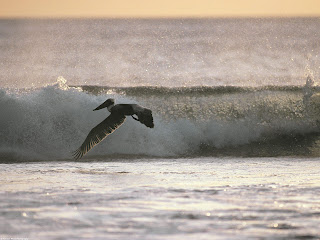 Until recently, it seemed safe to say that the pelicans arrived in June and left in September. That was before the summers of 2008 and 2009, when they flew in massive flocks and roosted by the hundreds, even thousands, in the rocks and bays of the Oregon coast. One observer, in July 2009, counted 22,000 pelicans on East Sand Island, in the Columbia River.

Then, in the winter of 2009-10, some pelicans chose not to migrate at all. An estimated 1,000 pelicans stayed on the Oregon Coast until the early spring, when they began to sport their breeding plumage. Some biologists wondered if they might establish a new breeding colony here in Oregon, 1,000 miles north of their usual rocks in sunny southern California.

Brown pelicans hanging around the Oregon coast concern some biologists. The following is from a January, 2010 article; Pelicans Lingering on Oregon Coast:


The flocks of about 20,000 brown pelicans that live on the Oregon coast in summer usually fly south before winter. But during the past three years, they've lingered -- perhaps another sign of climate change.

"I think it does have to do with big picture eco-change," said Deborah Jaques, a wildlife biologist in Astoria who contracts with the state and federal government. "They're a good indicator of that, but we don't have enough data yet."

And from March of this year; Brown Pelicans won't fly south from Oregon coast and that worries scientists:

Biologists are worried. Birds have starved to death and been pummeled by storms. Scientists are also perplexed about why they've altered their habits. Climate change could be a factor -- no one really knows for sure.

But last week, birders counted dozens on the coast. Lowe said there have been sightings of 60 in Newport, 25 at Charleston and seven in Depoe Bay.

"Maybe some of them will survive the spring," he said. "I haven't heard of any moralities. They haven't looked good for a long time, but they continue to hang in there."