Animal activists, as well as just, well, sane people, are creeped out by TheCheeky.com's offering of a piggy bank. (See Animal Activists Aflutter Over Real-Piglet Piggy Bank.) New take on a classic and iconic "toy" -- this one is a real pig. A dead pig, er, piglet, one that's been properly taxidermied. And they cost only $4,000.00 apiece. 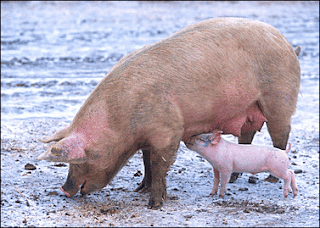 The company insists they find piglets that have died of "natural causes," and that's partly why the price tag is so high. Takes time to find a pristine piglet newly dead from natural causes.


The Winnipeg Humane Society commented that the bank is "a particularly callous and demeaning exploitation of a baby animal's dead body."

Again, the company insists no piglets are killed or abused, and the company seems baffled by the outcry, misunderstanding the general aura of Dr. Evil Gratuitous creepiness about the whole thing:

For some reason, people think we're breeding pigs with slots in their backs," he said. "Either these people are kids, or they're really, really special adults."


Hart, one of the founders of the company, is not for animal cruelty and agrees with animal welfare activists:

"It's important for people to back up animals, who can't speak," he agreed, "but we're not killing any animals."


But back to that creepy vibe; it seems Hart and his partner Ryan McCormick don't get it, or, maybe are just misunderstood in their twisted sense of humor view of the world, for another one of their products are "Glory Hole stickers." These tasteful items can be used thusly:


The stickers can be slapped on the walls of bathroom stalls to give the impression that the occupant is being watched.