I found the juxtapositions on the Delish site interesting: a story about blue lobsters being saved from the cooking pot, amongst recipes for lobster. 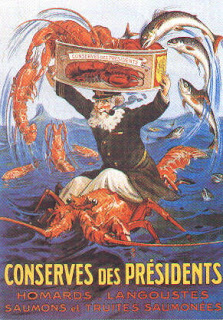 Usually, when rare colored lobsters are found, like blue ones (yellow and multi-colored lobsters have also been found caught) the lobsters are given to aquariums and escape being dinner. I'm glad of this fact of course (I don't eat shellfish) but it is interesting that we humans do this. I think donating unusually colored lobsters is a type of rite that serves to acknowledge the sacrifices made. The sacrifice of the lobster, surely, for the lobster has no say. Living its life in its own habitat one moment, caught, trapped in a murky green tank with claws taped shut the next, until it ends up on someone's dinner plate. Sacrifice for some humans, since lobster trapping is hard work, and when things go bad, the livelihoods of fisherman are affected. Allowing a caught lobster, kidnapped from its home, to live in an aquarium is symbolic of giving gratitude. It'd be better -- certainly for the lobster -- if the blue or other wise colored lobster were released back into the ocean. (One of the lobsters mentioned in the Delish article will be returned to its home.) Instead, almost always, the lobster is given to an aquarium park of some kind. In captivity, the rare colored lobster is a symbol for others, reminding us of many things: our self- gratifications, the ways we earn our livings, gratitude, and simply wonder at things as beautiful as a blue lobster.

Of course, most of us aren't thinking of these things on a conscious level, and probably not kids who go to the aquarium to enjoy looking at cool stuff. But there is a gestalt in these offerings of blue lobsters that nonetheless operates around us while we go about our everyday lives.
Posted by Regan Lee at 2:22 PM