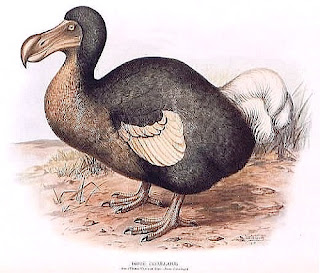 Some scientists want to bring back long dead animals. (Scientists Want to Bring Some Animals Back from Extinction - Yahoo! Finance) (Odd this article was listed in the "finance" section.) This is called "de-extinction." Dinosaurs are not on the list of creatures these Mad Scientists would like to bring back from the dead, but not for the obvious reasons, one being: Jesus Fucking Christ, they're dinosaurs!! Did you SEE Jurassic Park?! but because the dinosaur DNA is too "degraded." However, "ethics" or really "criteria" are a part of the process for deciding what gets reconstituted:


They chose the animals using the following criteria: Are the species desirable — do they hold an important ecological function or are they beloved by humans? Are the species practical choices — do we have access to tissue that could give us good quality DNA samples or germ cells to reproduce the species? And are they able to be reintroduced to the wild — are the habitats in which they live available and do we know why they went extinct in the first place?

"Beloved by humans?" Dodos seem pretty cute to me but who can say; that seems hardly the point. And how can one possibly be sure a reactivated animal could be safely introduced into the wild? Astounding that there are conferences where mad scientists gather to seriously ponder such possibilities.

The article includes a list of potential animals on the Dr. Evil Wish List. Among them: the DoDo, the Wooly Mammoth, the saber-toothed cat, and that Fortean mascot, the Thylacine.

The Dodo and the Quagga, among others, were hunted to extinction by man. Will these animals be brought back, only to have that happen again? Will it be legal to hunt these animals? Is it moral to bring back animals just so we can use them for our enjoyment, for example, open "De-extinction canned hunt camps?"