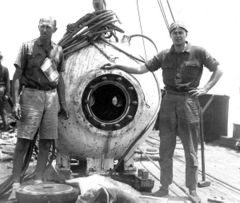 (Thanks to Greg Nathan) I discovered yet another Fortean twist to the bird falls-Beebe name game. The town of Beebe, Arkansas, as I wrote in the earlier posts, was named after Roswell Beebe. Another twist: the inventor of the bathysphere as William Beebe, among other things, an ornithologist:


William Beebe, born Charles William Beebe (July 29, 1877 – June 4, 1962)[2] was an American naturalist, ornithologist, marine biologist, entomologist, explorer, and author. He is remembered for the numerous expeditions he conducted for the New York Zoological Society, his deep dives in the Bathysphere, and his prolific scientific writing for both academic and popular audiences. ~ (source: Wikipedia)