Data Mapping, Cryptids, ET and Us: Nickell Provides the Answers

The ever disingenuous Joe Nickell, self-described "paranormal investigator" debunker, has discovered answers to all myths of a crypto nature in the following article by Ed Grabianowski:  Paranormal Investigator Joe Nickell Reveals the Truth Behind Modern Cryptozoological Myths. (All of them? Impressive.)

Regarding Bigfoot, Nickell combines finding patterns in sightings data, his theories, and the usual skeptic based psychology: us humans love to make stuff up. We create myth and don't want to solve mysteries -- well, you know the routine.


"Bigfoot is our stupid cousin from the past."

That's humans for you, projecting our fears and dreams onto made up entities. As far as ET goes:


"The alien is the future version of ourselves."

Which alien version would that be? Reptilian? Bug eyed gray? Gigantic praying mantises? Good looking long haired blond Nordic Space Brothers and Sisters? Lizard Men? Hairy dwarf? I don't know about you, but that's a future self I want nothing to do with. (Well, maybe the good looking Space Sister but I don't look good as a blond. And I prefer the swarthy types to Nordic guys.)

Nickell looked at "convergent iconography" which led him to the conclusion we've simply created Bigfoot and aliens out of our own heads; the two are modern living myths. We did the same with Santa Claus and Jesus:


"The same convergent iconography can be seen in artists' depictions of Jesus Christ and Santa Clause." 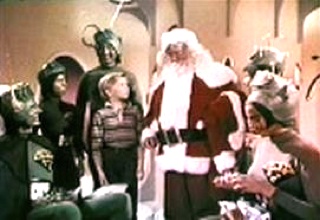 There is some truth in the idea that we shape our gods and heroes and they ultimately morph into a sort of set version dependant on the culture. To suggest to a religious person however that Jesus, the BVM, or angels are just in their head, based on agreed upon cultural imagery is both insulting and missing the point. And while I am not a Christian or believe in any sort of monotheistic god that watches over us like a somewhat authoritarian parent, using Jesus Christ and Santa Clause in the same sentence subliminally suggests they are one and the same in terms of fantasy.


Grabianowski asks Nickell about cryptids that don't look anything like human beings. Using  "data mapping" once again, Nickell finds that reports of water monsters coincided with otter activity.  People mistaking otters for a sea serpent: "It really happens," (I love that) Nickell says. Of course it "really happens" people mistake things all the time. Not every weird light in the sky is a UFO, not all strange creatures in the forest are Sasquatch and so on.


Nickell distances himself from combative skeptics and says he treats witnesses with respect; they're not liars or insane, just mistaken.

The article ends with a dismissal of paranormal programming which is "like wrestling" Nickell says. I'll agree with much of that sentiment, to a point. All TV is "like wrestling" when you think of it. For his arguments on how he's treated by producers as a skeptic, UFO researchers and other paranormal investigators can cite the same. It's about ratings, and whatever angle the show wants to present. Researchers and skeptics both can be damned; it's not about the individual ghost hunters, UFO investigators or cryptid chasers, it's about the producers, the station owners and their own agendas. Skeptic, paranormal investigator, or witness: they're all just the talent. Fodder for the program.

For some reason, most programs that deal with fringe topics believe that having skeptics on is "balance." To me it's just annoying. But it's not balance they want; it is, indeed, "like wrestling." There's an innate belief that conflict and tension is necessary for entertainment. Like wrestling.