I had an odd and creepy thing happen to me today. I parked in the large parking lot at the Goodwill. After checking out the Goodwill, I walked across the parking lot to go to the St. Vincent de Paul's, which is right next door. The Goodwill parking lot extends all the way to a little patch of grass, then the much smaller St. Vinnie's parking lot.

So I'm walking along, hot day, and see this skeleton just spread out on the blacktop, next to the patch of grass. You can see a bit of the grass in this photo: The placement is very odd. What's it doing there, right off the sidewalk and close to the parking lot entrance by a heavily trafficked street? A decomposing body would very likely have been moved by any number of businesses around there. It takes a bit of time for a body to decompose, so I'd think it would have  been noticed long before it got to the state I found it in.  It looked staged, as if someone had brought it there. Maybe another animal dragged it there somehow. But, why? Overall, seems odd.

That parking lot gets a lot of traffic every day, lots of people going by in cars, and on bikes, as well as pedestrians.  The area is an industrialized area with lots of stores around; right across the street from a large grocery and department store, fast food places, etc. When I looked closer at the photo it looked like one of the legs had been cut off, or detached. Either intentionally cut or by natural process, hard to know. And its other back leg bent and sticking up, then the long tail, which you can see in the first photo. At first I thought the leg sticking up on the left was a tail, but I think it's a rear leg. I'm not sure what this animal was.  At first I thought it was a cat, but what looks like a tail (on the left) is awfully long; too long for a cat.  Then I thought possum, but the head doesn't seem the right shape. 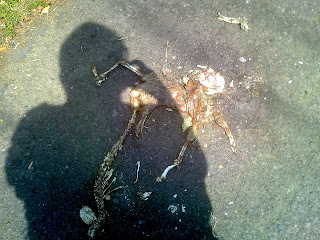 This is the first picture I took; sun was bright but the image has a spooky artistic  vibe, don't you think?
Say, maybe this is the skeleton of a chupacabra!
I don't mean to be flip, it's both creepy and sad, as well as a bit weird. A mundane explanation -- possum, say, -- but I can't figure out what it is. And it is strange how it got there.
Posted by Regan Lee at 12:17 AM