Jim hits his head, starts to bleed.  Not good, because he's on medication that affects bleeding and bruising --  the simplest cut bleeds profusely and takes a long time to heal. Scary but we think it'll be okay. Keeping a watch on it of course.

A few minutes after that, we're sitting in the living room, reading, when we hear strange sounds from the side of the house. Loud, scrambling scratching sounds. It sounded close to the sound a cat makes when it scratches its claws on wood. I had a fleeting thought it was one of our cats outside scratching on the side of the house, which has never happened, and, that would be one huge cat to make such a loud noise. 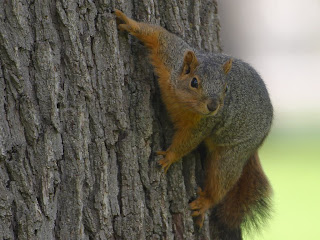 Then we hear something falling down the chimney and into our fireplace. Yep, a squirrel! Fortunately for us we have a wood stove insert, and the squirrel can't get out into the house. But the poor thing is stuck inside, terrified of course, and we're sitting here listening to its frantic scrambling. We wouldn't try to do anything ourselves; Jim can't afford to get bit or scratched, we have four cats, and the last thing I want in this crazy house of ours is a loose squirrel running around.

I've called Willamette Wildlife Rehabilitation and left messages. Our neighbor tells us they respond no matter what the hour or day of the week so we're hoping they call us back soon.

This is not the first time this has happened; a squirrel fell down our chimney a few years ago. Jim climbed up on the roof and put a cap on the chimney at the time. We've had a few storms and snow so no doubt things got out of alignment up there.

Superbowl Sunday. Not that I care about that, I don't, not one bit, but Jim does, (as I realize half of America) and all he wanted to do was relax and watch the game. Poor sweetie.