Omens on the Coast 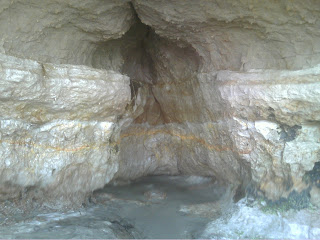 We had a wonderful time on the coast over Thanksgiving. We stayed in Yachats, and took a lovely, if a bit spooky, walk on the beach. This particular beach is one in front of the motel (The Silver Surf) where we stayed, and very different from the surrounding beaches. That's one of the things I enjoy about the Oregon coast: it's diversity within a small area. 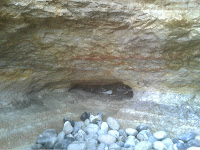 There isn't much area between ocean and where property sits. You really have to be aware of when the tides come in or you're in trouble. We saw several of these little niches or "cave-lets" as Jim called them; little grottoes within the sandstone. Hide aways for Bigfoot? :) But as always, when exploring the coastal area, my thoughts turn to Bigfoot! 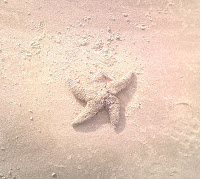 It's not unusual to see dead birds on the beach either; I often come across a dead gull or some other type of bird while walking on the beach. But this time, I found four dead birds: three gulls and one crow, in a sort of curved row. Very odd to see so many birds in the same spot like that; in a long line, about five feet from each other. The next day, about a quarter mile from the motel, we saw a gull standing in the middle of the highway. Birds always fly off when you get close, but this gull just stood there, and Jim had to swerve to avoid hitting it. The gull was standing over -- and eating -- a gull carcass. About an hour later, as we were driving back, we saw what we assumed was the same bird, dead on the road, near the cannibalized gull. 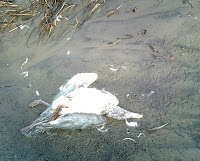 I also had the joy of watching a pelican hover, swoop and hunt above the sea, among all the gulls. At first we didn't know what we were looking at; one very large dark bird among all the whitish gray gulls. Was it a large gull, an osprey? We couldn't tell at first, then realized it was a pelican. I'd seen pelicans before of course, but usually, they're just sitting around. I'd never seen one fly about and "fish" before. I don't know, but it seems like it was unusual to see it by itself; I've always seen pelicans in flocks.

I had wanted to explore Stonefield Beach; but when we turned onto the drive we found a sign announcing  that the park was closed. Very interesting; locals, according to this article, are annoyed at tourists in the area but I find that a strange response. The whole coast is a tourist area, particularly around there; plenty of areas to hike, hunt, fish, explore. I didn't notice other beaches in the area that were closed. It's possible Stonefield was closed for other reasons having to do with safety; I can't see authorities giving in to locals who might complain about peole on the beach. If that were true, the whole coast would be closed down. My interest in the checking out that area has to do wtih local lore about UFOs, aliens, and other high strangeness. 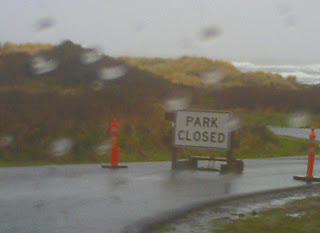 We have a great time, and the motel we stayed at was very nice but we had some odd moments of electrical high strangeness. (Not a complaint at all, just observation.)  The phone in the room kept beeping; we finally had to disconnect it. My camera did something it had never done before; I went to turn it off, and all this static happened; lots of weird bands and a kind of strobing effect. WiFi was out, but that's not unusual on the coast; I did get it fine the next day, to my surprise, because it was much stormier this morning than it had been the last two nights.  A light wouldn't come on at all, we gave up, but the next day, it was fine and  came on with no trouble. Topping things off, I found the strangest message on my answering machine when I got home; electronic buzzings and beepings, a computerized voice telling me I was being sent a text message on my land line, a string of numbers, and it wasn't from anyone I know, yet did have something to do with an interest of mine, though no one I know who's aware of that interest  has my land line number... very odd.