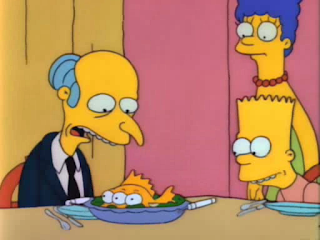 Frankenfish may be a pop culture catch phrase that elicits images of a Simpson's episode, but it's a serious area of concern for all of us. This artificially manipulated super salmon speaks to our consumerism, our greed, our insatiable appetites -- literally and figuratively. Global control of our food supply and quality, profits, and control of us. The latter may be entering the paranoid conspiracy realm, but so be it. Private corporations having major say in what goes in our bodies (swallow a chip lately, anyone?) without our input, and without our knowledge.

In June of this year I posted on my blog Octopus Confessional,   about "Frankenfish" in 'Dr. Evils Mess With Fish':


While many no doubt see this as a good thing, I find it chilling. Maybe I'm just too paranoid in my old age. I love salmon, so who wouldn't want bigger and more? Not me, I don't trust it, and it is so wrong on many levels. The following New York Times article Genetically Altered Salmon Get Closer to the Table, gives us the happy news about genetically messed with salmon, still to be approved by the FDA.

The developer of the salmon has been trying to get approval for a decade. But the company now seems to have submitted most or all of the data the F.D.A. needs to analyze whether the salmon are safe to eat, nutritionally equivalent to other salmon and safe for the environment, according to government and biotechnology industry officials. A public meeting to discuss the salmon may be held as early as this fall.

This Giant Salmon was developed by the happy sounding titled "AquaBounty Technologies" which raises the Giant Salmon (a mix of the Atlantic, Chinook and pout salmon) in fish farms.

If approved and the Giant Salmon clears various environmental and other hurdles, other genetically modified animals will be offered to us, such as the "enviropig."

The FDA isn't treating the Giant Salmon like food, exactly:

Under a policy announced in 2008, the F.D.A. is regulating genetically engineered animals as if they were veterinary drugs and using the rules for those drugs. And applications for approval of new drugs must be kept confidential by the agency.

“There is no opportunity for anyone from the outside to see the data or criticize it,” said Margaret Mellon, director of the food and environment program at the Union of Concerned Scientists. When consumer groups were invited to discuss biotechnology policy with top F.D.A. officials last month, Ms. Mellon said she warned the officials that approval of the salmon would generate “a firestorm of negative response.”

Some within the infra-structure are well aware of the politics and implications involved. In an understatement to be sure, an individual who wants to remain anonymous said:

Government officials and industry executives say the F.D.A. is moving cautiously on the salmon. “It’s going to be a P. R. issue,” said one government official, who spoke on the condition of anonymity because he was not authorized to speak about the issue.

Genetically modified foods do not have to be labeled; consumers apparently don't have the right to know.

Foods must be labeled, it says, only if they are different in their nutritional properties or other characteristics.

Ignoring, among other things, that altering and modifying foods, splicing them with say, glowing fish or spider webs, affects the "nutritional properties."

In a display of spin and topsy turvy thinking, AquaBounty representative Mr. Stotish says he's not against "voluntary labeling" but gee, it's not up to him:

but the matter was not in its hands because it would only be selling fish eggs to fish farms, not grown salmon to the supermarket.

He said the company had submitted data to the F.D.A. showing that its salmon was indistinguishable from nonengineered Atlantic salmon in terms of taste, color, vitamins, minerals, fatty acids, proteins and other nutrients.

“Our fish is identical in every measurable way to the traditional food Atlantic salmon,” Mr. Stotish said. “If there’s no material difference, then it would be misleading to require labeling.”

And finally, no need to fear the impact of  Giant Salmon on the environment, because all the fish are:

female and sterile, making it impossible for them to mate.

Today's news brings us the following: From 10 Freakiest Things About Frankenfish


Obama's FDA is regulating genetically engineered salmon, a genetically modified organism (GMO) that is the first of its kind, not as an animal, but as an animal drug. Normally, a veterinary drug would be used for health purposes, but there's no therapeutic benefit associated with jacking up an Atlantic salmon with the genes of a Chinook salmon and the eel-like ocean pout to make it grow twice as fast. On the contrary, genetic engineering increases the salmon's mortality, disease and deformity. So, why would the FDA treat a the first genetically engineered animal for human consumption like a drug? The idea came from the biotech industry. They knew that the FDA's animal drug process would keep companies' "proprietary" information secret, while limiting public participation and downplaying food safety concerns. Genius.

The above is from a slideshow of Frakenfish related facts and links about the FDA, genetically modified foods, engineered DNA, and the surreal reasoning behind laws governing such.

From slide 3; Frankenfish DNA Could Change the Bacteria in Your Gut:


A human study conducted by the UK's Food Standards Agency found that consuming genetically engineered soy can result in "horizontal gene transfer," where the bacteria of the gut takes up the soy's modified DNA. With GMO salmon, the bacteria of our digestive tracks could take up the engineered salmon genes, but the FDA isn't looking into whether this would happen or how it might effect our health.

And the afore mentioned surreal realm of regulations and laws: slide 7: If It Swims Like a Salmon, FDA Says its Safe to Eat. Slide 6 informs us that AquaBounty, the company hoping to control sales of altered salmon, is the place where the FDA has gathered its data on the safety of Frankenfish salmon:


The FDA's food safety review of GMO salmon consists of collecting data produced by AquaBounty, the company that wants to sell it. Not surprisingly, that data is seriously flawed. * AquaBounty did not always segregate, or even collect, data specific to their AquAdvantage GMO Salmon. And, FDA did not require AquaBounty to produce data in the actual conditions under which the salmon will be commercially produced, so we don't have food safety data on the Panama-raised, triploid, monosex AquAdvantage Salmon that people will be actually be eating if the FDA grants approval. * FDA did not require AquaBounty to show that AquAdvantage and normal salmon were similar when raised under the same conditions. AquaBounty's food safety data for genetically engineered salmon did not have to match data for its control salmon. [For the rest go here.]

Besides the overall bizarro world, surreal nature of all this, along with the greed, is the sheer arrogance of the FDA and others promoting shoving Frakenfish upon us:


The FDA notes evidence of "increased frequency of skeletal malformations, and increased prevalence of jaw erosions and multisystemic, focal inflammation" in the tissues of GMO salmon. Most people wouldn't be too surprised to learn that genetic engineering can mess a fish up. What might shock you is that the FDA dismisses these findings as "within the range observed in rapid growth phenotypes of non-genetically engineered Atlantic salmon." [ Slide 9]

At the risk of sounding like a paranoid Tea Party-Bagging Illuminati wacknut, there is a lot to ponder when it comes to greed, arrogance, -- sheer hubris -- and control. Would Dr. Evils and mad politicians go so far as to destroy natural habitats to gain power and profit?:


Two months ago, a copper mine failure in China's TingRiver killed millions of fish. A similar disaster at Pebble Mine could mean the destruction of a quarter of a billion pounds of salmon, curiously, about the same amount of GMO salmon Aqua Bounty hopes to produce. The EPA could stop Pebble Mine through the Clean Water Act but has failed to act. Greenberg writes, "More transgenic fish, less wild fish. You have to scratch your head at a government that's planning that kind of seafood menu for its citizens. Instead of endorsing a risky experiment in genetic salmon modification wouldn't it be better if our leaders protected wild salmon habitat? In the end we'd have just as much fish on our plates and a safer environment to boot." [Full item here.]

You can sign a petition here urging Obama to stop the creation and sale of altered salmon.