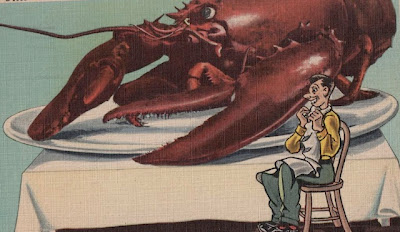 Lobster items in the news. Another giant lobster spared story, this one from New England, about a 21 lb. lobster that was caught in the waters of Cape Cod:21-pound lobster released to New England Aquarium (UPDATE) | The Sideshow - Yahoo! News A woman won a lobster raffle who said she had planned to spare the lobster's life all along:

My plan was always to donate the lobster to the Aquarium was to generate awareness and allow people to see the creature, and of course, to keep the lobster from being trapped again and, this time, ending up on someone's dinner table," she told Yahoo! News. "The only thing I requested from the Aquarium was a chance to see the lobster when I visit Boston on August 6th and they were kind enough to grant my request."


Another lobster item in the news today. A shipment of lobster's received by a Massachusetts restaurant contained several orange lobsters. This AP item appeared in the "Lighter Side" section of our local paper. Among others, The Huffington Post published the item. This designation frustrates me. The following is not a cutesy feel good item about a child's lost puppy now found safe, but an increase in unusual colorations in lobsters. The reason for these coloration are potentially disturbing reasons: global warming/climate changes, signals of things going wrong in our oceans due to pollution, etc. But the item in the local paper, concluded with comments from Michael Thusty, who is the director of research at the New England Aquarium at Boston: "Right now you can make a lot of explanations, but the actual data to find them out out just isn't there." One possible explanation for this increase in colorful lobsters was the "active Twitter sphere" and "people get [getting] excited about colorful lobsters." Another possible reason: increase in lobster harvests; more lobster hauling, more lobsters, chances increase for oddly colored lobsters. (Blue, orange, bi-colored, yellow...)
Posted by Regan Lee at 9:01 AM