BBC News - "No evidence of mermaids, says US government" 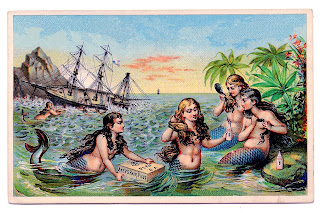 This may seem to be a fluff piece but I can't help myself, I sense an undercurrent (no pun intended) of disinfo and distraction. No, I don't mean to suggest mer-people literally exist. But in this article: BBC News - No evidence of mermaids, says US government it is made clear the National Ocean Service took the time to respond to supposed public inquires about the existence of mermaids after Animal Planet aired Mermaids: The Body Found. In the BBC news article, we have this quote from NOAA's Carol Kavanagh that the NOAA article (see below) "was written from publicly available sources..." and that is  due to their lack of a  "mermaid science programme."

Here is the official article from NOAA: No evidence of aquatic humanoids has ever been found.  It's a very short piece -- three paragraphs and concludes:


But are mermaids real? No evidence of aquatic humanoids has ever been found. Why, then, do they occupy the collective unconscious of nearly all seafaring peoples? That’s a question best left to historians, philosophers, and anthropologists.

I haven't seen Animal Planet's program. According to the press release at their site, they reference the Aquatic Ape Theory:


The Aquatic Ape Theory makes it possible to believe that while we evolved into terrestrial humans, our aquatic relatives turned into something strangely similar to the fabled mermaid. As evidence that humans once evolved into aquatic creatures, the Aquatic Ape Theory cites some of the striking differences between man and other primates and the many features we share with marine mammals, including the following: