They say it's 21 feet in length. Plans for the animal: the "star attraction" in an ecopark. 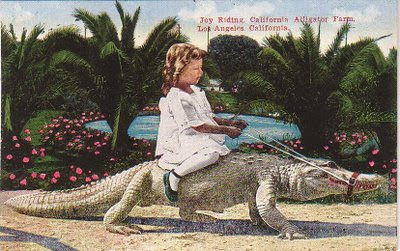 Elorde said the crocodile killed a water buffalo in an attack witnessed by villagers last month and was also suspected of having attacked a fisherman who went missing in July.
He said he sought the help of experts at a crocodile farm in western Palawan province.
"We were nervous but it's our duty to deal with a threat to the villagers," Elorde told The Associated Press by telephone. "When I finally stood before it, I couldn't believe my eyes."
After initial sightings at a creek, the hunters set four traps, which the crocodile destroyed. They then used sturdier traps using steel cables, one of which finally caught the enormous reptile late Saturday, he said.

Image source: French Factrice (visit this site, it's full of vintage goodness, including a film clip from the 1940s of a children's alligator farm.)
Posted by Regan Lee at 6:24 PM