Odor of the Owl

I posted these at my blog The Orange Orb; combining them here, about a London perfume house and its new image/mascot. 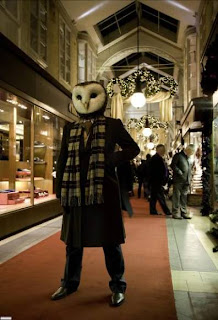 Yes, that's right, it's odor, not order. Things do get curiouser and curiouser. Thanks to Brownie, who left a comment with a link on my Merry Christmas post about London's scary and creepy owl perfume campaign. Penhaligons, a perfume shop, has created the Olfactory Owl. Lots of links to this story, just Google as usual, here's one: Penhaligon's unleash a scary anthropomorphic owl onto London's streets.

Dressed in Victorian finery, the Olfactory Owl will be journeying across London on foot and by tube and bus, taking in some of London’s iconic landmarks and shopping hotspots.

The Olfactory Owl will be handing out coupons, and you can join the odoriferous owl on Twitter and Facebook. The conspiratorial Fortean mind reels, making connections between England's rash of staged/faux UFO crashes and alien abductions in schools, and this recent episode of a giant owl walking the streets of London.

I noticed on Penhaglion Ltd. Facebook page, there are lots more man-owl pics, even with children in its lap. Some commenters think its charming. (yikes!)

I know that niche fragrance houses use avant-garde commercials to distinguish themselves from the mass market brands, but this owl-man doesn't make sense (as Lesley noted - owls have poor sense of smell anyway).

Lesley Gunter, at The Debris Field, commented on the post, and I blogged about that:

The Debris Field: The Odor of the Owl

Lesley comments on the Owl perfume mascot out of London; she points out something I didn't know, that owls don't have a strong sense of smell.

As Lesley mentions, the owl as image is a strong and major one in esoterica:

We all know the owl is the most esoteric creature around, associated with alien abduction, bad omens, Bohemian Grove and so much more.

"They" must know of the owl's powerful impact on the subconscious in this regard. On the surface, one could point to the popularity of the owl in the Harry Potter novels, and the owl in general is a current popular culture motif in fashion. But being of a conspiratorial and Fortean mind, I think this imagery goes deeper than that.

I also agree with Lesley about clowns -- they're creepy and strange and evoke insidious intent -- and mascots, particularly animal ones, aren't any better.

The Facebook page has several photos of the "Olfactory Owl," which appears to have weird ghostly eyes, sans pupils, or maybe that's just the way they appear in the photos due to lighting.


The first report of the Owlman came on the Easter weekend of 17th April 1976. Two young girls, June and Vicky Melling, aged twelve and nine, saw what they described as a big feathered birdman hovering over the steeple of Old Mawnan Church. In fact the children were so frightened by the experience that their family cut short their holiday and went home.

Three months later, on 3rd July 1976, around 10:00 p.m. but not quite dark, Sally Chapman, age fourteen, and her friend Barbara Perry were camping in woods around the church. They heard a hissing sound and saw what looked like an owl as big as a man, with pointed ears, and red eyes that were glowing. It was standing near the pine trees and flew straight up into the air, which made them scream.

That's just the beginning, much more to this story that remains a mystery to this day.
Posted by Regan Lee at 6:20 PM